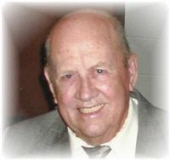 James (Jim) A. Jans, 79, of Kamrar, died Friday October 19, 2012 at the Israel Family Hospice House in Ames. His funeral service will be Wednesday 10:30 AM October 24, 2012 at the Community Church of Kamrar with Pastor Peter Mueller officiating. The visitation will be Tuesday, October 23rd from 6 to 8 PM at the church. Burial will be in the Presbyterian Church Cemetery. Boman Funeral Home is caring for the family.
Jim was born to Hilko & Ella (Mechaelsen) Jans on July 27, 1933 in Williams, IA. He graduated from Kamrar High School in 1950. In 1953 he entered the US Army. He was released in 1955 after serving a year and a half overseas during the Koren conflict. Jim married Shirley Capsel on May 24, 1957 in Webster City.
He farmed near Kamrar and worked in maintenance at Hamilton County Public Hospital. The couple owned and operated Steve’s Place in Kamrar.  He enjoyed carpentry and sports. Jim enjoyed whatever his children, grandchildren and great grandchildren found interest in. He was a member of the Community Church of Kamrar.
His family includes children: Randi & Ed Masek, Jill & Tim Scott and Steven all of Kamrar; grandchildren: Ashley & Jody Soma of Gilbert, Barry & Sarah Scott of Ackley, Blake & Alex Renaud of Williams; step grandchildren: Brooke Masek of Cedar Rapids, Dustin & Amanda Masek of Norfolk, NE; great grandchildren: Piper & Brody Soma, Elijah Renaud, Owen & Archer Masek.
Jim was preceded in death by his wife of 55 years, Shirley on September 15, 2012; infant son Larry Dean in 1960; his parents, Hilko and Ella; brothers and sisters-in-law.
To send flowers to the family in memory of James (Jim) Jans, please visit our flower store.