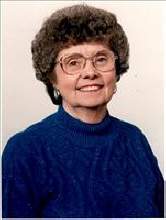 Janet Leanne Foster was born to Jesse & Alyce (O’Connor) Foster on December 29, 1934 in Webster City. She attended school in Webster City and was a member of the class of 1952. Janet married John Larson in 1951 they later divorced. She married Russell McCollough in 2001.

Janet worked at Sears in Fort Dodge for over 20 years as a sales associate before being employed at the Target store also in Fort Dodge. She & Russ wintered in Texas for several years. Janet loved playing Bridge, 500 & Scrabble. She bowled in leagues in both Fort Dodge and Webster City. She tutored ESL students. Janet was a member of the Webster City Women’s Club & the Church of Christ.

She was preceded in death by her parents, husband (Russ) and sister Claudette Mikelson

A funeral service will be held on Wednesday at 10:00 AM at the Boman Funeral Home 613 Ohio in Webster City, with Pastor Ray Artrip officiating. Visitation will be on Tuesday from 4 - 8 pm at the funeral home
To send flowers to the family in memory of Janet L. McCollough, please visit our flower store.