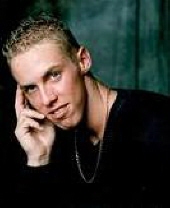 
A funeral service will be held Wednesday March 11, 2009 10:00 AM at Trinity Evangelical Lutheran Church in Webster City with Rev. Dr. Michael Kroona officiating. The visitation will be held Tuesday from 6 – 8 PM at the Boman Funeral Home on Ohio Street. Burial will be in the St Joseph’s Catholic Cemetery in Duncombe.

Jarid was born to David & Susan (Ewing) Koester on October 29, 1982 in Webster City, IA. He graduated from Webster City High School in 2001 and The Bobby Isaac School of Motor Sports of Hickory, NC in 2004. He was an avid go-cart racer. He was the 1997 IKF Regional Champion and finished in 7th place at the 1998 IKF nationals. For many seasons he was the track champion at both Poplar Grove & Nessa Brothers Speedways. He had been a peer helper and a Special Olympics coach.