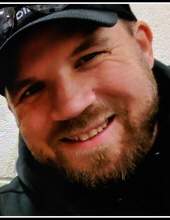 Jay Dee Wynkoop, 38, of Webster City, Iowa has passed away. The family has chosen Boman Funeral Home (www.bomanfh.com) to care for their needs.

Shortly after being transplanted to Webster City, Jay met his future wife Danielle (Neubauer) in Mr. Meyer's math class while attending Northeast Hamilton in Blairsburg, Iowa in 1996. Jay is a graduate of Northeast Hamilton with the class of 1999.

In 2013 Jay and Danielle blended their families, each with five children from previous relationships. One year later they welcomed a daughter. The couple was married in a private ceremony in Ames, Iowa on February 3, 2015. Together they have eleven children: Wesley Wynkoop, Serine Wynkoop, Curtis Heuton, Päsha Kirk, Xavier Wynkoop, Sebastian Kirk, Gavin Wynkoop, Braydon Wynkoop, Lucian Kirk, Maci Wynkoop, and Izzabella Wynkoop.

Jay enjoyed the simple things in life. Sharing his love of music and family movie night were some of his favorite pastimes. In his thirties, Jay developed a passion for farming and trucking. He enjoyed being able to share his interests with his children taking them on tractor rides or in his semi whenever possible. He loved being able to teach them skills and spend time with them at their sporting events and concerts whenever he was home.

Feeling that he had missed much of his children's lives, Jay took a sabbatical from being an over-the-road truck driver in June of 2019. He traded his e-logs for snack schedules and math homework. Jay loved being a stay-at-home parent. He enjoyed being able to run the kids to and from their activities, school, and appointments.

Having spent the last seven years of his life focused on their family and building a life together, it seemed things were finally starting to fall in place. However, Jay's health was a growing concern. Jay was born with a neurological disorder called Hyperekplexia. Diagnosed at the age of five, Jay was treated for the condition at the University of Iowa hospital in Iowa City. As an adult, he was under the care and the close supervision of his family physician. Jay struggled with symptoms that he felt were connected to a lifetime of injuries due to his neurological disorder. The concern that he may have developed Chronic Traumatic Encephalopathy or CTE became an issue that needed to be addressed. Despite medical advances in the field, there is no cure or treatment for CTE at this time. The only way to confirm this condition is after death. Knowing this, a plan was in motion for Jay's health needs.

Although his family will never understand the moments and decisions that led to his death, Jay was adamant that he never wanted to be a "burden" for his family.

The family will be sending his brain to Boston University's Chronic Traumatic Encephalopathy Center for analysis in hopes that it may further research and treatment of both conditions.

In respect of Jay's wishes, there will be no visitation, funeral or celebration of life. In lieu of flowers, the family asks that everyone remember to be kind and respectful to one another. Everyone is someone's somebody and everyone deserves to be loved.
To send flowers to the family in memory of Jay D. Wynkoop, please visit our flower store.