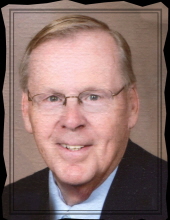 John “Jack” Spratt 77, of Webster City died on Tuesday, March 14, 2017 in Winfield, IL. The family will receive friends and relatives on Saturday, April 1, at Asbury United Methodist Church from 8:30–10:30 AM followed immediately by a Memorial Service at 11:00 AM in the church. The family has chosen Boman Funeral Home (www.bomanfh.com) to care for their needs.

Jack was born on June 20, 1939 in Osage, Iowa to Richard and Esther (Dicus) Spratt. He graduated from Greene High School in 1957. He’s been an University of Iowa Hawkeye Fan since graduation in 1962. He worked for Nutrena Cargill as a district sales manager and lived in several different communities during that time. Jack and his wife Rosemary moved to Webster City in 1975 and became the owners of D’s Coffee Shop and Kountry Fried Chicken, where they enjoyed serving people and visiting with the many customers. He also sold Insurance and Investments/annuities for several companies, for more than 30 years.

Jack was a member of Asbury United Methodist Church, Gideons, and Jail Ministry. He served as a member of the Airport commission and Zoning Commission. He was a long-time Boy Scout leader, taught Sunday school and youth group at Trinity Evangelical Lutheran Church, and Sunday School and Awana at Asbury United Methodist Church. Jack shared his faith with many and distributed Gideon Bibles wherever he went. Jack taught and mentored many young people while in the restaurant. For a number of years, he and Rosemary were in charge of food preparation for the community Christmas dinner, serving 125-200 people. Jack supported Rosemary in her gift of music. He was always gifting others with food, and old bicycles that had been restored. He loved spending time with his grandkids doing things they enjoyed and talking on the phone with them.

He was preceded in death by his parents; wife; brothers: Jerry, Draper, Jim, and Howard; sisters: Judy, Marylyn, and Melita; brothers-in-law: George, Will, and Harold; Sister-in-law Jo; and nephew Ron. Memorials will be used for the Gideons Memorial Bible program, and Mendi Ethiopia Mission program through Hosanna Lutheran Church.
To send flowers to the family in memory of John "Jack" Spratt, please visit our flower store.