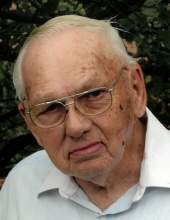 John W. Christenson, 85, of Webster City, died on Monday, February 28, 2022, at VanDiest Medical Center in Webster City. Visitation will be at Faith United Methodist Church, Webster City on Friday, March 4, from 10:00 – 11:00 AM followed by the funeral service at 11:30 AM. The family has chosen Boman Funeral Home (www.bomanfh.com) to care for their needs.

John was born on January 15, 1937, in Kamrar, Iowa to Leroy and Anna (Wepel) Christenson. He attended the Webster City schools, graduating high school in 1954. After graduation he worked on a farm and then worked at ASCS. In January of 1967 he started working for IA DOT Road Maintenance, he was there for 30 years, retiring in June 1997.

John married Sharon Madson on June 26, 1966, at the EUB Church in Webster City. He was a member of Faith United Methodist Church, in Webster City. John enjoyed model trains, working on cars, camping traveling, fishing, and most of all spending time with his family and grandchildren.

To send flowers to the family in memory of John W. Christenson, please visit our flower store.