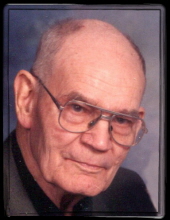 Johnie Christenson, 96, died on March 12, 2018, at Crestview Nursing & Rehabilitation. The family will receive friends and relatives at Calvary Baptist Church in Webster City, on Friday, March 16, from 12:00-1:00 PM followed by a funeral service at 1:30 PM. The family has chosen Boman Funeral Home (www.bomanfh.com) to care for their needs.

Johnie was born on February 01, 1922, to Morris and Mary (Slawson) Christenson in Webster City, Iowa. He attended the Webster City Schools. Johnie served as a Private 1st Class in the US Marine Corps from October 1942 – October 1945, he spent most of his time in the Pacific, as an anti-aircraft gunner, and was an expert rifleman.

He married Grace F. Erickson on May 7, 1949, in Laporte, MN. Johnie worked for Nissen Packing Company in Webster City for most of his working years, until he retired in 1984. He was a member of the National Rifle Association, the American Legion, and Calvary Baptist Church. Johnie enjoyed Guns, reloading ammunition, reading western paperbacks, and studying the Bible.