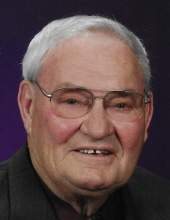 Kenneth Arthur Youngdale, 92, 0f Webster City, passed away on Sunday, July 5, 2020 at his home, surrounded by his family. Visitation will be at The Bridge (905 Des Moines Street) on Friday, July 10, 2020) from 9:00 – 10:30 AM Followed by the memorial service at 11:00 AM. Masks are encouraged for those attending. The service will also be livestreamed on Boman Funeral Home Facebook page. The family has chosen Boman Funeral Home (www.bomanfh.com) to care for their needs.

Ken was born on April 2, 1928 in Dayton, Iowa. He attended Dayton Community Schools and graduated in 1946. In 1949 he married Bonnie Lambert, the family resided in Dayton, Iowa. He worked for Wayne Tell, drilling wells, and as a custodian for the Dayton Community Schools. The family then moved to Webster City in 1961. He bought Webster City Roofing Company and later started Youngdale Construction Co. During this time, he was part of the Baptist Four Quartet at First Baptist Church, was on the Trustee Board of Sioux Falls University and was also on the National Board of Directors for American Baptist Churches.

He married Jean (Bauer) Nicholson in 1990. Ken spent the first part of his “retirement” working for Peterson Construction Co. Ken enjoyed life and working was his hobby. When health issues forced him to finally quit working, he enjoyed joking with his coffee groups and quarter flipping with friends.
To send flowers to the family in memory of Kenneth Arthur Youngdale, please visit our flower store.