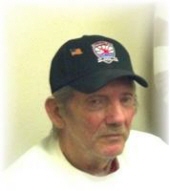 Larry “Grover” Dean Groves, 68, of Stanhope, Formerly of Ames, IA, passed peacefully  Wednesday, May 29, 2013 at his daughter’s home.  His visitation will be held Friday from 6-8 at Boman Funeral Home in Webster City.  A funeral service will be held Saturday 11 AM at the funeral home.  Burial will be in the Williams Cemetery in Williams.  At Larry’s request please attend the visitation and funeral in your blue jeans and ISU or racing t-shirt.
Larry was born to Gerald and Margaret (Millsap) Groves on September 1, 1944 in Webster City.  He graduated from Williams High School and then attended Ellsworth Community College in Iowa Falls.  He Married Georgene Scott in December of 1964, the couple later divorced.
Larry was employed by Ames City Fire Department, Iowa Road Builders, Manatts, and retired on September 1 2012 from Iowa State Trucking due to poor health.  He was a member of the Moose Lodge 520, Sons of the American Legion Post 37, and the Hunt N Fish Club of Frazier.  Larry enjoyed watching Nascar, Knoxville Iowa Speedway and dirt track racing.  As a firefighter he would work the pits for the Indy 500.
Larry is survived by his mother Margaret of Ames; Children:  Cathy (Edward) Doughty of Stanhope, and Craig (Lynn) Groves of Callender; four Granddaughters; five Grandsons; four great Granddaughters; Brother Richard (Carol) Groves of Onawa; and Sister Gwen (Rich) Taylor of Ames.  He was preceded in death by his father.
To send flowers to the family in memory of Larry (Grover) Dean Groves, please visit our flower store.