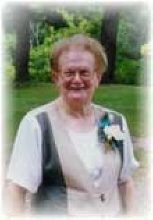 A funeral service will be held Tuesday at 1:00 PM at First Baptist Church in Webster City, Pastor David Doerr will officiate. Visitation will be held two hours prior to the funeral at the church. Burial will be in the West Lawn Cemetery in Lehigh, IA. Boman Funeral Home in Webster City is in charge of arrangements.

Lela Evelyn Haglund, 86, of Webster City, IA, died Thursday March 6, 2008 at the home of her daughter and son-in-law.

She was born August 21, 1921 in Jewell, IA to Charles & Hattie (Hildahl) Knox. She graduated from Webster City High School in 1939. She married Carl William Haglund on November 25, 1942 in Stratford, IA. Lela worked as a nurse’s aid at the Heritage Care Center in Iowa Falls. In 1996 she moved to the home of her daughter and son-in-law.