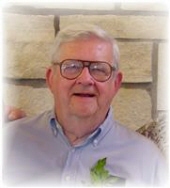 Leon William Durivage, Jr. of Webster City, formerly of Marion, Iowa, died Friday June 21, 2013 at Southfield Wellness Community. A visitation will be 5-7 PM Tuesday, June 25, 2013, at the Boman Funeral Home in Webster City. A scripture service will be at 7 PM. The funeral Mass will be held 2 PM Wednesday, June 26, 2013, at St. Joseph Catholic Church in Marion with vistation one hour before Mass. Burial will follow in Oak Shade Cemetery in Marion.
Leon was born to Leon Sr. & Felicienne (Bechard) Durivage on July 9, 1930 in Troy, NY. He graduated from LaSalle High School in 1948 then entered the U.S. Army and served as an X-ray technician until his discharge in 1952. Leon obtained his Bachelors degree from Rensselaer Polytechnic Institute in electrical engineering in 1957. Geri Lessor and he were married in 1955 at St. Patrick’s Church in Troy, NY. Leon worked for General Electric for seven years and Collins Radio for 28 years from 1964-1992.
Leon was a dedicated problem solver. He volunteered with the Boy Scouts while his sons were active and for Habitat for Humanity. He enjoyed his aeromodeling club, the Cedar Rapids Skyhawks. Through St. Joseph Church, Leon served the Vietnamese community and was recognized by them for his dedication. Leon served as an usher for 40 years and was a member of church's finance and building and renovation committees. He enjoyed restoring his 1954 MG. Among Leon's other interests included playing the piano, reading science fiction books and doing many DIY projects for family and friends.
His family includes his wife of 58 years; children Leon William (Lori) Durivage III of Lino Lakes, MN, Catherine Ann Durivage of Owatonna, MN and David Paul (Dawn) Durivage of Webster City; six grandchildren; Kristina, Leon IV (Mary), John, James, Hannah and Danielle and brother Raymond of Watervliet, NY. Preceding him in death are son (Michael) and brother (Francis).
Memorial donations may be sent to the Wounded Warrior Project (P.O. Box 758517, Topeka, Kansas 66675) or to a charity of your choice in Leon's memory.
To send flowers to the family in memory of Leon William Durivage, JR, please visit our flower store.