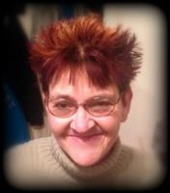 Lindsay was born on December 13, 1963 to Raymond “John” and Velma (Ades) Long.  She graduated from the Webster City High School in 1982.  She had two children with James Morgan III. Lindsay worked at Webster City Custom Meats for a few years, Becker Florist, and McGilligans in Webster City for several years. Lindsay was a very hard worker throughout her life whether on the job or at home.  She was married to Dennis L. Peterson on May 18, 1996, in Homer, Iowa.

Lindsay was a member of the Homer United Methodist Church, and the West Central Region Cockshutt/Co-op Club.  She was considered an “Utter Mutter” for several children.  She enjoyed fishing, dogs, boating, flower gardening, “hanging” with friends and family, and spoiling her grandkids.  Lindsay especially enjoyed the time spent with Dennis camping at Little Wall Lake and Mission Garden Resort in Mission, Texas.