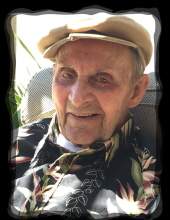 Lloyd Irwin Johnson, formerly of Webster City, died on Monday, August 27, 2018, at his home in Huntington Beach, CA. A graveside service will be held at 2:00 PM , on Tuesday, September 11, 2018, at Cass Center Cemetery. The family has chosen Boman Funeral Home to care for their needs.

Lloyd was born on July 07, 1926 in the city of Dana, Iowa to Orville & Lulu (Lawrence) Johnson. Lloyd may only have finished the 8th grade level in school, but he had more practical knowledge about farming, building, and mechanics than most college graduates. He wasn’t the best reader, but God taught him to read better by reading the Bible over and over each year.

Lloyd entered the Army on Jan 24, 1945, and in 14 months worked his way up from Private to Private First Class as an Ammunition Bearer, then to Corporal as a Mortar Gunner and finally to a Sergeant as a squad leader. As squad leader, he served with the 21st Infantry in Honshu and Kyushu, Japan. He supervised and instructed 5 men in a mortar crew in the aiming, loading and firing of an 80 MM Mortar. Instructed men in weapons operations. He was Honorably discharged Nov 29, 1946, and was awarded the Asiatic Pacific Theater Ribbon, the Victory Medal, The Good Conduct Medal, the Army of Occupation Medal Japan, World War II Victory Medal

Lloyd met Ina Marie Everhart of Eagle Grove, Iowa, through mutual friends on a double date. Ina liked him right off the bat because he was such a wonderful gentleman. He and Ina were married on June 3, 1951, at the Little Brown Church in the Vale in Bradford, Iowa. They just celebrated their 67th anniversary in 2018.

Lloyd was a farmer in Williams, Iowa and specialized in Hog raising. Lloyd loved working the land and working with animals. He farmed from 1951 to 2002 when he retired and moved into Webster City, Iowa

Lloyd was a member of the Church of Christ in Webster City, Iowa from his youth. He and his wife, Ina, brought up their children in that same church. Lloyd became a deacon early on and then became an elder of the church for most of his time at that church. He loves the Lord and served Him with honor. Well done good and faithful servant. His children could see him praying and reading his Bible often and instilling in them the need to have a relationship with Jesus.

He didn’t have a lot of time for any hobbies, but he did enjoy cooking Bar B Q, Making homemade Ice Cream and fishing & hunting with his brothers. Also, later in life Lloyd and Ina were able to get away on vacations to Mexico and Hawaii.

Lloyd was preceded in death by His parents and three of his siblings, Marge Brower, Helmer Johnson and Glen Johnson. His only surviving sibling is Jean Schwandt
To send flowers to the family in memory of Lloyd Irwin Johnson, please visit our flower store.