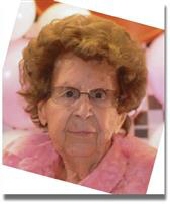 Lois Lucille Mason, four days from 90 years old, died Saturday, August 22, 2015 at the Van Diest Medical Center in Webster City.  Her visitation will be at Boman Funeral home on Monday August 24, 2015 from 5 to 7 PM.  The service will be at Graceland Cemetery (enter off Beach Street) in Webster City on Tuesday at 2 PM with Rev Jeff Flagg officiating.  www.bomanfh.com.

Lois was born to Samuel & Agnes (Hoisington) Desher on August 26, 1925 in New Providence, Iowa.  She attended schools in Hardin County, New Providence, Iowa Falls & Slater.  Her family was very proud of the fact that she earned her GED in 1991.  She and Myles were married on April 12, 1945 in Fort Dodge, IA.  Myles joined the U.S. Army and Lois worked at the ordinance plant in Ankeny during WW II.  After the war they started their farming operation south of Webster City. They raised crops, hogs, beef, sheep & chickens.  Lois dressed chickens for nine Webster City family-run grocery stores. They retired from farming in 1995.

She was a member of the Silver Thimble Club and the Asbury United Methodist Church where she taught the four year old Sunday School for nine years. She enjoyed playing cards, traveling (37 years in Phoenix), deer & bird watching, mushroom hunting, vegetable gardening and canning.