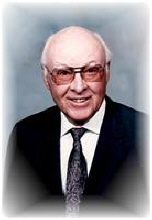 Lowell (Twisty) Mechaelsen, 76, of Webster City, IA, died Monday – September 14, 2009 at this home. A memorial service will be held Saturday at 10:30 AM at the First Baptist Church in Webster City. The family will receive friend’s one hour prior at the church. Boman Funeral Home is serving the family. Bomanfh.com

He was born to Oliver & Lois (Munson) Mechaelsen on February 26, 1933 in Kamrar, IA. In 1951 he graduated from Kamrar High School. Pat Nelson and he were joined in marriage on June 16, 1954 in Kamrar. The couple resided in Kamrar for two years, and then moved to Webster City. Twisty worked for Block Oil Company as a tank wagon driver for 26 years. In 1989 he started working for Doolittle Oil as a driver.

He & Pat enjoyed the 13 years they traveled in their motor home. He enjoyed fishing. Many friends have played on his pool table. He was a member of First Baptist Church where he served as a church officer.

Survivors include: his wife of 55 years, sons Ben of Webster City & Brad (Karen) of Austin, MN, six grandchildren, and sisters Lila (Phillip) Berglund of Dayton, IA & Marine Jacobsen of Ames, IA. He was preceded by his mother in 1984, father in 1992 and three brothers-in-law Loren Jacobsen 1990, Fritz Weir 2001 & Robert Nelson 2003
To send flowers to the family in memory of Lowell (Twisty) Mechaelsen, please visit our flower store.