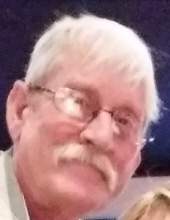 Lyle Moss, 67 of Webster City died on Sunday, May 29, 2022, at the Iowa Methodist Medical Center, in Des Moines, Iowa. Memorial Service will be held at a later date. The family has chosen Boman Funeral Home (www.bomanfh.com) to care for their needs.

Lyle Kenneth Moss was born on December 19, 1954, in Clarion Iowa to Palmer and Alice (Whipple) Moss. He graduated from the Webster City High School in 1973. Lyle was united in marriage to Ellen J. Shinn in 1973 and to this union there were 4 children. The couple later divorced. Lyle learned the Body Shop business from Vic, and worked for him at Vic’s Body Shop, he eventually went into partnership with him and then purchased the business in the 80’s. In 1996 Lyle was united in married to Eileen Shockey in Las Vegas, Nevada.

Lyle enjoyed car shows, especially ones with “muscle cars”. He sponsored race cars at the Hamilton County Speedway. Lyle was a very good cook and had a collection of cookbooks. He also enjoyed collecting things that reminded him of his childhood.

To send flowers to the family in memory of Lyle Moss, please visit our flower store.