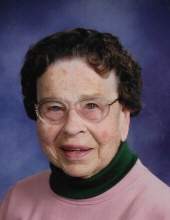 Mabelle Raska, 91, of Webster City, IA died on Monday, November 16, 2020, at Crestview Nursing & Rehabilitation. Funeral Service will be held at 10:00 AM on Saturday, November 21, at St. Paul’s Lutheran Church in Webster City, IA. The family will be at the church at 9:00 AM. Boman Funeral Home (www.bomanfh.com) is taking care of the family’s needs.

Mabelle was born on April 16, 1929 to Ivan and Dorothy (Tuttle) Clabaugh on a farm east of Williams, Iowa. She attended school in Williams, graduating in 1946. She clerked at O’Donnell’s food store for many years while attending school.

Mabelle married Verner Frank Raska on February 4, 1951 at the Williams Methodist Church. While her husband served in the Korean Conflict (1951-1953), she was the bookkeeper at Schager Produce in Alden, Iowa. The couple moved to Webster City in 1954 and have lived there ever since. She had been employed as bookkeeper for Middleton Arodance and later worked for 19 years in the office at Arrow-Acme Corporation. She also helped Verner in the Raska Upholstery Shop.

Mabelle’s family includes many nieces and nephews. She was preceded in death by her parents; husband; sisters: Carmen Poole and Mary Williams; and Aunts and Uncles.

To send flowers to the family in memory of Mabelle Raska, please visit our flower store.