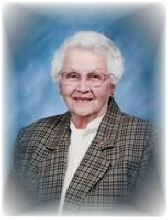 Margaret Yeoman Patten, 93 years, of Webster City, IA passed away September 12, 2013 in Hubbard, Iowa while in the care of the Hubbard Care Center and Homeward Hospice.  Her funeral will be Thursday September 19, 2013 at 11 AM at St. Thomas Aquinas Catholic Church in Webster City.  Visitation will be one hour prior. Burial will be in Calvary Cemetery in Webster City.


Margaret Helen Yeoman was born January 21, 1920 on the Yeoman family farm north of Aberdeen, South Dakota.  She was the youngest of ten children born to Joseph S. and Wilhelmina Theunissen Yeoman.  Margaret graduated from the Aberdeen Sacred Heart Catholic School, the Aberdeen Central High School (class of 1938), and the Aberdeen Business College.
She married Clarence C. Patten on January 5, 1942 in Aberdeen, South Dakota.  Clarence was drafted into the army for WWII one month after their marriage.  In the fall of 1942, the couple moved to Pasadena, CA when Clarence was stationed at Huntington Beach and Margaret was employed at the Douglas Aircraft Co. in Long Beach.  When Clarence was sent to Europe for 17 months for WWII, Margaret returned to the Yeoman family farm in South Dakota.  After the war Clarence returned to his previous employment with the International Harvester Co in Aberdeen, SD.  His employment with IH moved the family to Austin, MN, Emmetsburg, IA, Osage, IA, and in 1974 to Webster City, IA.
The couple raised 5 children.  Margaret was a stay-at-home mother till the mid 1960’s when she took employment with the school lunch programs at the Osage Community High School and then the Webster City Schools and finally the head cook at the St. Thomas Aquinas Catholic School in Webster City, IA.  Clarence and Margaret both retired in 1980 and traveled, gardened, volunteered for over 15 years with RSVP and enjoyed their grandchildren.  Margaret was a loving wife to Clarence for over 70 years, till he passed on May 16, 2012.
Margaret was active in the Catholic Church throughout her life and was a member of the Webster City St. Thomas Aquinas Church.  She was a beautiful woman in body, mind & spirit.  For the last years of her life, Janice and Roger Heiden were honored to be her caregivers.
She is survived by five children: Maurice (Janna) Patten of Mesa, AZ; Doris E. Patten of Columbia, SD; Janice Kay (Roger) Heiden of Williams, IA; Mary Jo Losen-Greenup (Mark Greenup) of Omaha, NE; and Sharon Patten of Washington, NJ; six grandchildren: Jeffrey (Shawn) Patten, Emily Losen, Alexander Losen, Anthony (Kate) Viotto, Taylor Viotto, and Auston Viotto; four great-grandchildren: Cody Patten, Deanna Patten, Ashleann Viotto, and Declan Viotto.
She was preceded in death by her parents; her husband, Clarence; son-in-law, Monte Losen; nine brothers and sisters:  Thomas Yeoman, Theresa Artz, Joseph Yeoman, Jr., Gertrude Daugherty, Henry Yeoman, Frank Yeoman, Min Hartman, Dorothy Warfield, and Mary Jaggers.

To send flowers to the family in memory of Margaret Helen Patten, please visit our flower store.