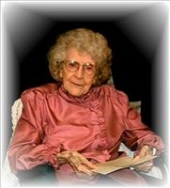 Marguerite Cecilia Christopherson Coursey, a longtime Webster City resident, died early Saturday, May 14, 2009, at Crestview Manor following a long illness. A visitation will be held Wednesday from 5 – 7 at Boman Funeral Home in Webster City. A service to celebrate the life of Marguerite Coursey will be held Thursday, May 28, 2009, at 11:00 a.m. at Trinity Lutheran Church, with the Rev. Dr. Michael Kroona officiating and Boman Funeral Home in charge of arrangements. She will be laid to rest beside her husband, Merrill, in Graceland Cemetery, Webster City.
Mrs. Coursey was born April 28, 1906, on her parents’ farm outside Wolsey, South Dakota. She was the second of four children born to Norwegian immigrants Lars Lewis and Olive Martina Quelland Christopherson. She was a lifetime member of the Lutheran Church, baptized and confirmed at St. John’s Lutheran Church in Wolsey, SD.

She attended school in Wolsey until the age of 14, when she moved with her family to Huron, SD, where she graduated from Huron High School. She was employed as a bookkeeper for Singer Sewing Machine Company in their regional office for a several years. On June 16, 1928, she married Merrill McKinley Coursey in the American Lutheran Church of Huron, SD. They lived in several South Dakota communities, including Rapid City, and Sioux Falls, before moving to Webster City in 1940. Mr. Coursey died in March of 1949.

Mrs. Coursey worked in the office of Hamilton County Hospital. After attending Webster City Community College, she worked as a teller at Farmer’s National Bank. She remained there until her retirement in 1972. She spent four year in Huron caring for her mother. Mrs. Coursey was a member of Trinity Lutheran Church, active as long as her health permitted. She participated in the women’s groups and served as president of the Women of the Church. She sang in the choir, and often sang solos in the church and the community. She taught Sunday school and Vacation Bible School and was Sunday school superintendent for many years. She was a member of the Altar Guild and served on the Church Council. She helped organize the Girl Scouts in Webster City and was a Girl Scout leader. During World War II Mrs. Coursey did volunteer work at Hamilton County Hospital. She was a 50-year member of P.E.O. and the Order of Eastern Star.

Mrs. Coursey is survived by her sister, Thea Christopherson Indseth of Del Mar; CA; her daughter and son-in-law, Marilyn Coursey and husband Al Sorensen of Houston, TX; her son-in-law, Rich B. Meyer of Redwood, CA; her four grandchildren, Paul Coursey and wife Stacia Ann Sorensen of Houston, TX; Hyla Sorensen and husband Raymond Weiss of Ocean Springs, MS; Jacob Meyer of Portland, OR; and Zachary Meyer of Seattle, WA; two great-grandchildren, Cameron Coursey Sorensen and John Walker Sorensen of Houston, TX; a nephew, Robert and wife Barbara Indseth and their son, Eric Merrill Indseth, of San Diego, CA. In addition to her husband, she was preceded in death by her daughter, Hila Coursey Meyer, a granddaughter, Eva Meyer, her parents, a brother, LaVerne, and an infant sister, Ilene.
Marguerite Coursey would want any memorials directed to Trinity Lutheran Church, Webster City.
To send flowers to the family in memory of Marguerite Cecilia Christopherson Coursey, please visit our flower store.