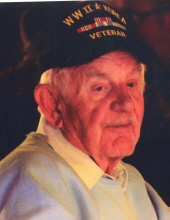 Mark Clyde Lindgren, 90, of Duncombe, Iowa died on Monday, August 21, 2017, at Trinity Hospice in Fort Dodge. Local visitation will be Wednesday, August 23, from 5-7 PM at Boman Funeral Home (www.Bomanfh.com) in Webster City. Funeral Service will be Thursday, August 24, at 10:30 AM at Washington Lutheran Church in Duncombe. An additional visitation in Story City will be held on Thursday at Immanuel Lutheran Church from 5-7 PM.

Mark was born on June 27, 1927, to Esther (Peterson) & John Lindgren of Boone, Iowa, one of eleven children. Mark was a decorated Army veteran, serving in WWII, the Korean War, and the Army Reserves. He was retired from Osco Drug, 3M Manufacturing, and the Army, as well as co-owning “The Way Christian Bookstore” in Story City with his 2nd wife Janet for 42 years. Mark was very involved with Loaves and Fishes Food Pantry for many years. One of his greatest joys was to go on the WWII Veteran’s Honor Flight in 2009.

Mark was a people person and quick to share a joke or story. He lived a full life and enjoyed a great card game or puzzle. He will be very much missed by many. In lieu of flowers please send donations to Trinity Hospice of Fort Dodge.

He was preceded in death by his parents; two children; all of his siblings; and his first two wives.