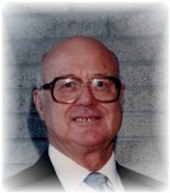 Marvin Elliott, 87 of Webster City, passed away on Tuesday, December 24, at Southfield Wellness Community in Webster City.  He was born on August 5, 1926 in Webster City, to Harold and Clara Christensen Elliott.
Marvin graduated from the Webster City High school in 1944, he served in the military during WWII, and then attended Iowa State University graduating in 1950.  He married Audrey Bell on January 10, 1954 in Webster City.  He farmed for 14 years and then taught Adult Ag in Minnesota.  Marvin received his MS degree from Minnesota State University in Mankato in 1973.  He was then employed as a farm manager in Fort Dodge, and returned to farming until his retirement in 2005.  Marvin was a member of the Elks Club, and the American Legion.  He enjoyed hunting, fishing and golf.
His family includes: Audrey, his wife of 59 years; son Steve (Deb), of Andover, MN; daughter Kay (Bill Cosgrove) Elliott, of Brooklyn Center, MN; grandson Jake who is attending Minnesota State at Mankato, MN; sister Arlene Rudi of Glidden, IA. He was preceded in death by his parents, sister Shirley, and brother Wendell.
Funeral Services will be Friday, December 27, at 1:30 PM at the Boman Funeral Home in Webster City, with Rev. Gina Spohnheimer officiating.  Visitation will be one hour prior to the service. Burial will be in the Graceland Cemetery.  WWW.Bomanfh.com
To send flowers to the family in memory of Marvin Elliott, please visit our flower store.