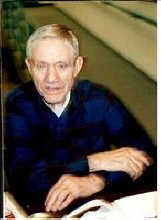 Memorial Service for Marvin will be held Saturday, May 23, 2009 at 4:00 PM at Boman Funeral Home in Webster City,IA.  Rev. Richard Laird will officate.


Marvin Lyle Claude, 85, of Webster City, IA, died Friday-January 2, 2009 at his home. His body was donated and a memorial service will be held this spring under the direction of Boman Funeral Home in Webster City.
Marvin was born to Emile L. & Marie E. (Ahnne) Claude on February 21, 1923 near Woolstock, IA. He was one of four boys who graduated from Woolstock High School in 1940. In January 1942 Marvin enlisted in the US Navy. He retired in 1961. On February 5, 1944 he married Virginia Mae Anderson in Webster City. Marvin was a custodian with Moline Community Schools until retiring in 1981. His memberships included Fleet Reserve Association, Friend of the Ban de la Roche, and the Webster City Birthday Club. His membership was with the New Testament Church of Webster City. Marvin was a past trustee of the NE Iowa Christian Service Camp.
He is survived by his wife of 64 years; three daughters Jacqueline (Harry) Laun of Edmonton Alberta, Canada, Mary Elinor Kuhn of Paint Lick, KY, Cynthia Claude-Rawson of Waterloo, IA; brother Gaylord (Barb) Claude of Moline, IL; sister Dorothy Jeanne DeMarce of Red Oak, IA; seven grandchildren; 11 great grandchildren.
He was preceded in death by daughter of Linda Banker, son-in-law Jake Kuhn, sister Ruth & brother-in-law John Stepp, brother Richard Claude, brother-in-law John DeMarce, sister-in-law Rose Claude & a grandson in infancy. Memorials may be given to the charity of choice.
To send flowers to the family in memory of Marvin Lyle Claude, please visit our flower store.