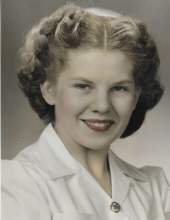 
Mary Lou Hemminger Gordon passed away Friday, March 12, 2021 at the age of 93 at Windsor Manor in Webster City, Iowa. A visitation will be held from 9:30 – 10:30 AM on Wednesday, March 17, 2021, at the Anchor Point Church (formerly 1st Baptist Church), in Webster City, followed by a funeral service at 11:00 AM. Private family burial will be at Cass Center Cemetery. The family has chosen Boman Funeral Home (www.bomanfh.com) to care for their needs.

She was born in Cass Township, Hamilton County on October 26, 1927 to Mildred and Harold Hemminger. Mary Lou attended country school at Fremont #7, graduated from Webster City High School in 1945, then entered nurse’s training at Marshalltown Deaconess Hospital that fall. After graduation in 1948 she worked as an RN at Deaconess Hospital and Boone County Hospital. She married Virgil Gordon September 10, 1950 and they moved to the family farm SW of Webster City. She continued to work part-time at the Hamilton County Hospital for 30 years and also did private duty nursing.

Mary Lou was an active volunteer throughout her life. She served as a 4-H leader for 12 years, was on the Extension council for 4 years and received the 4-H alumni award and the Honorary 4-H member award. As a member of First Baptist Church, she served in several capacities as Circle Chairperson, Board of Christian Education, Women’s Society, Deaconess, Sunday school teacher and organized countless meals for church functions. She was a member of PEO chapter JE since 1990. She also volunteered at the Library annual book sales, the gift shop at the hospital and delivered Meals on Wheels. In 2004 she was named “Citizen of the Month” for her community involvement. Her hobbies included sewing, quilting and card making.

Family and friends were especially important to Mary Lou. She enjoyed helping her three daughters, Nancy, Barbara and Peggy with their 4-H projects, teaching them to sew and become good cooks. She also cherished times with her 8 grandchildren and 9 great-grandchildren. She enjoyed the friendship of her neighbors, card club friends and church friends. The family took many annual vacations and Virgil and Mary Lou traveled extensively in their retirement years.