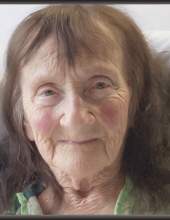 Maxine, daughter of Frank and Pearl (Harman) Zeihan, was born on a farm west of Jewell on May 20, 1927. She graduated from Jewell High School in 1944. She worked as a legal secretary for many years.

On June 10, 1950, she married Fay Gordon Abbey at St. Mary’s Rectory in Ackley, Iowa. They resided at Concordia and Wichita, Kansas where Mr. Abbey was an automobile dealer and auctioneer until his death on June 1st, 1954. Maxine returned to Webster City and resided with her father and worked in the Law office of Bernstadt, Hemingway, and Hemingway in Webster City.

On November 21, 1958, she married Francis Marion Johnson at St Francis Xavier Church in Belmond, Iowa. The couple later moved to their farm near Jewell and engaged in farming. Two children were born to this union. Her husband passed away on February 25th, 1995.

She loved all animals and will be missed by her two pet cats: Angel and Little Callie. Maxine was a member of St. Thomas Aquinas Church in Webster City, the American Legion Unit #191, of Webster City, IA since 1954, a member of the Hamilton County Farm Bureau, and of the Best Friends Animal Sanctuary for many years.

In Lieu of flowers, memorial contributions may be given to: Best Friends Animal Society, 5001 Angel Canyon Road, Kanab, UT 84741 (www.bestfriends.org).
To send flowers to the family in memory of Maxine Frances Johnson, please visit our flower store.