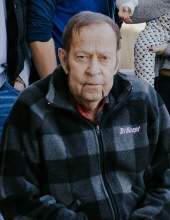 Butch (Melvin) Helton passed away on February 19, 2019. Butch was born on July 11, 1947, in a small town in southern Iowa. On April 1, 1966, he married Trudy Studley. Butch is survived by his wife, Trudy, to whom he was married for almost 53 years, and his three children: Tami (John) Doran of Ankeny; Mel (Mark) Fielder of Webster City; and Chris (Kait) Helton of Fort Dodge. He is also survived by his six grandchildren who were his pride and joy: Haley Doran; Brenden Doran; Alec Doran; Dylan Fielder; Drew Fielder; and Emilie Helton. Butch was preceded in death by his father (Howard Helton), mother (Evelyn Negley), step-mother (Pearl Helton), step-father (Raymond Negley), sister (Mary Sommers), and two brothers in infancy.

A visitation will be held on Sunday, February 24th from 1:30 - 4 p.m. at Boman Funeral Home in Webster City. A private service for the family will be held on a later date.

As Butch said shortly before his death, he “lived a good life.” He knew he wasn’t always the perfect husband, but he loved his wife. In one of his last conversations, he gave all of the credit for their lengthy marriage to Trudy and referred to her as “very patient” then smiled because he knew that was a bit of an understatement. He also told his children to look after their mom and make sure that she’s taken care of after he’s gone.

Although he often joked about having to wait forever for Chris to finally get around to it, Butch felt very blessed to have lived long enough to see all of his children get married and have families of their own. He
wasn’t a man of many words, but he definitely showed his love for his children to them through his actions as he supported them through life’s challenges and joys. Even as adults, his children knew that their dad would be there for them whenever they were struggling.

They also knew that they could always call their dad to receive the weather forecast before traveling. He was the family weather man. But he was a dad first which meant that, regardless of how old they were, his children always had to let him know when they reached their destination safely.

Speaking of traveling, his children will always cherish their memories of many family vacations, especially those times when Butch would refer to his getting lost as “taking the scenic route.” They’ll also cherish their memories of Canada fishing trips, gardening conversations, playing Yahtzee, hanging out at the Co-Op (where their dad worked for decades and made many great lifelong friends), Sunday drives in the country (some of which involved their dad scaring them by telling them that the car wasn’t going to make it over an old wooden bridge under which trolls lived), and so many more adventures.

More than anything, however, his children will remember and cherish the love that their dad had for his six grandchildren. His most important title was “grandpa” and his grandkids absolutely meant the world to him. And they knew it by the love he showed them over and over again throughout their lives.

He spent countless hours untangling fishing line and baiting hooks while fishing with his grandkids over the years. He checked on the garden on his daughter’s farm multiple times a day because that meant more time with her boys. And he even got a smartphone, set up a Facebook account and learned how to text and use FaceTime so he could communicate even more with his grandkids and share in their joys.

A while back, Butch was talking on the phone to Chris during one of their nightly conversations (they) spoke on the phone almost every night for the past decade) and Chris asked him if there was anywhere in the world that he would like to travel while he was still able. He said that all that he wanted in his last days was time with his grandchildren. He got it in a big way as those grandkids called, texted and came together in his hospital room to surround him with love. You’ve never seen anyone more proud than Butch was whenever he was surrounded by his grandkids, even when it was in a hospital.

Everything that Butch has done to show his family love, lift them up and support them over the years will have an impact on the world for a very long time to come. That’s quite a legacy if you ask us.
To send flowers to the family in memory of Melvin (Butch) Leroy Helton, please visit our flower store.