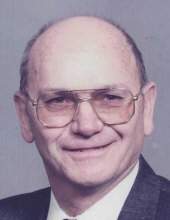 Melvin Lee Richardson, formerly of Webster City, died on Thursday, August 19, 2021, At Mary Greeley in Ames, Iowa. Private family Service will be held at a later date, cards may be sent to the family in care of Boman Funeral Home (www.bomanfh.com) 601 Ohio Street, Webster City, IA 50595.

He was born on August 15, 1925, in Webster City, to Glen Lee and Guilia Agnes (Cannon) Richardson. Melvin attended the Webster City Schools, graduating in 1943. He then joined the Seabees in September and during his three-year enlistment served in Hawaii, Iwo Jima, and Okinawa. He was discharged in February 1946 with rank of Machinist Mate 2nd class, as a heavy equipment operator.

After his discharge, Melvin returned to Webster City and worked in the refrigeration Repair business. He was married to Phyllis Arline Short on August 22, 1948, and lived in Omaha for three years before returning to farm in the Webster City area for 25 years, where he also did carpentry and building. They moved to Webster City in 1975. In 1987, he and Phyllis started P&M Apparel, an embroidery business in the basement of their home. The business grew and they later moved it to Seneca Street, and in 1998 moved the business to Polk City. Their legacy grew as daughter and son-in-law, Kay and Rob, took over ownership. Grandchildren Megan and Ryan manage it as the third generation.

Melvin was a member of the Webster City Church of Christ serving as a Deacon, Elder, Treasurer, and Sunday School leader. He was a leader in the boys 4-H club and also an Explorer Scout leader. He enjoyed his grandchildren and great grandchildren’s activities and woodworking. Gifts for his children and grandchildren included memo boxes, jewelry boxes, and clocks with a quilt block design. He especially enjoyed fishing in Canada with his family.