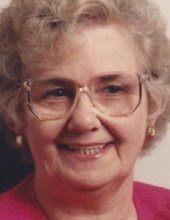 Muriel I. Lund, 90, passed away on Friday, October 7, 2016, at Southfield Wellness Community in Webster City, Iowa.

Visitation will be Saturday, October 15, 2016, from 1:00 to 4:00 p.m., at Boman Funeral Home in Webster City. Following visitation, cremation will take place. Private family graveside services will be held at Graceland Cemetery in Webster City at a later date. For online obituaries and condolences please visit: www.carsonstappfuneralhome.com or www.bomanfh.com

Muriel Irene Gane was born on February 13, 1926, in Shepton Mallet, England, the daughter of Ernest and Elsie (Phipps) Gane. She attended schools in the area of her birth. During WWII, Muriel met Don Lund, who was serving his country in the United States Army while stationed in England. Don and Muriel were united in marriage on March 22, 1945, at St. Peter & St. Paul's Church in Shepton Mallet, England. To this union three children were born: Donna, Robin, and Michael. Following the war effort, the couple returned to the United States. They lived in Story City, Iowa, and in the mid 1950's, moved to Webster City where they established their home. Muriel worked at Morton's Frozen Foods and Spurgeon's in Webster City, retiring in May of 1991.

Muriel was a loving wife, mother, grandmother, and great-grandmother. Her family meant the world to her. She enjoyed cooking, family gatherings, and visiting with family and friends over a cup of hot tea. Her hobbies included quilting and cross-stitch, gardening, and painting Don's woodcarvings. Muriel and Don loved nurturing their yard and enjoyed the comments from people how beautiful it was. She also enjoyed watching the deer that occasionally visited. Family will cherish the memories spent there.