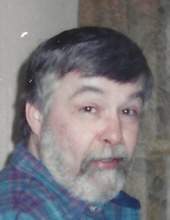 Murray Wray Anderson, 71, of Webster City, died on September 2, 2021. The family will receive friends and relatives on Friday, September 10, 2021, from 2:00-3:30, at the Briggs Woods Beach Shelter, followed by a Memorial Service at 3:30 PM, (the family requests casual clothing). Boman Funeral Home (www.bomanfh.com) is caring for the family’s needs.

Murray was born on July 29, 1950, to Harold Sr. and Ethel (West) Anderson in Webster City, Iowa. He attended Stanhope High School, where he participated in track. When he was 18 years old, he started working at Products in Webster City where he worked his way up to Journeyman in maintenance and was there until Frigidaire closed in 2012. He was a member of the Isaak Walton League, and UAW 442.

Murray was good with his hands, there was not anything he could not fix or remodel, and he spent many hours remodeling the family’s home. Murray also enjoyed hunting deer, waterfowl, and coon, and would often go fishing in Canada. He was as part of a bowling league and played golf. He also loved his dogs.

Murray’s family includes: his wife & Companion of 43 years Debbie; three daughters: Letitia Anderson of Fort Dodge, Melissa Anderson of Webster City, and Heather (Jerry) Deuel of Webster City; and three grandchildren: Olivia Richardson, and Tenley & Bria Deuel. He was preceded in death by his parents; son Marty in 1986, and brother Punky in 2016. Memorials can be designated to the family and will be used to purchase a tree in memory of Murray.
To send flowers to the family in memory of Murray Wray Anderson, please visit our flower store.