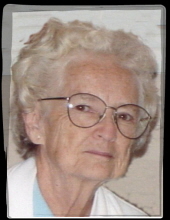 Norma Jean Egger, 86, died Friday, August 19, in Hubbard Iowa. Funeral services will be at 2:00 PM on Tuesday, August 23, at the Faith United Methodist Church in Webster City. Visitation will be from 5-7 PM on Monday, at Boman Funeral Home (www.bomanh.com) in Webster City.

Norma was born on August 20, 1929, in Marcus Township to Clair and Mildred (Goodburn) McIntire. She attended the Marcus Schools, graduating from Marcus High School. She married Donald Paul Egger on October 21, 1947, the couple lived in Cleghorn until moving to Stanhope in 1959.

Norma stayed home and raised her children until the early 1970’s when she started working at ISU cleaning and then working in the cafeteria before becoming the head seamstress for the entire facility, until her retirement. Her husband Don passed away in 1998.

Norma was a member of the Methodist Church, served as choir director and with the Methodist Youth Fellowship in Stanhope. She had a servant’s heart and she helped a lot of people and never wanted any credit.