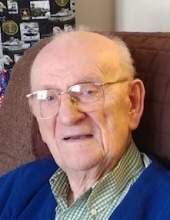 Norman Hinkle, 99, died peacefully into the arms of Jesus, on June 10, 2021, in his home at The Meadows Assisted Living in Clarion, Iowa. A celebration of his life will be held later in Syracuse, NY. The family has chosen Boman Funeral Home (www.bomanfh.com) to care for their needs.

In 1949, Norman married Ruth Hutchinson, in Pottstown, PA. The couple had 30 years together before her passing in 1979. He was then married to Betty Crowley for 36 years until her passing in 2015, at which time he moved to Iowa, to be near family.

He dedicated much of his life to his family, working for AT&T, organic gardening, Ham Radio Ministry, was influential in starting Faith Heritage Christian School and WMHR Christian Radio. He also mentored many in their personal relationship with his Lord and Savior. His family is so grateful for the influence he had on his children, grandchildren and great-grandchildren; they will miss him greatly… but … “It’s not goodbye …We will see you later”!

In Lieu of flowers, contribution in his memory can be sent to Faith Heritage School (Syracuse, NY) or Mars Hill Network (Syracuse, NY)
To send flowers to the family in memory of Norman Hinkle, please visit our flower store.