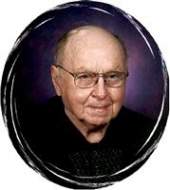 Oliver Tritt “Tuck” Myers, 89 of Webster City, IA, died Thursday October 1, 2009 at Trinity Regional Medical Center in Fort Dodge, IA.
A memorial service will be held Saturday October 10 at 10:30 AM at Faith United Methodist Church in Webster City, Pastor Mike Willer officiating. Visitation will be on the day of the service at the church starting at 9 AM. Burial will be in Graceland cemetery, Webster City. The Boman Funeral Home in Webster City is in charge of the arrangements.
He was born February 12, 1920 in Webster City to Melvin Fishburn & Margaret (Harlan) Myers. Oliver was on the 1936 -1937 Webster City Lynx Football team as a tackle: “Undefeated, Untied, and Unscored upon.” He joined the Army Air corps then enlisted in the US Navy as a member of the armed guard. He was assigned as a gunners mate on a liberty ship. Oliver sailed around the globe one and a half times and was away from his home port for 33 months.
In 1947 he married Dorothy Agan in Webster City. He worked as a mechanic for area shops until he retired in 1983. Oliver spent much of his time outdoors. He was good at woodworking and was a handyman on the property. He remodeled and added on to their home on Des Moines Street. Ollie was one of a very few that didn’t mind digging, having trenched the perimeter of the house after retiring. He was a member of the Faith United Methodist Church and the American Legion Post #191
Survivors include his wife of 62 years; son & daughter-in law Daniel Lynn “Minnie” Myers & Linda Kloberdanz of Webster City; sister Virginia Hill of Iowa Falls, IA & sister-in-law Mildred Myers of Webster City. He was preceded in death by his son Dale Leon Myers in 1967, sister (Mary), brothers (George & Lee) & an infant sibling. Memorials may be made to the charity of the donor’s choice or directed to the family.
To send flowers to the family in memory of Oliver Tritt "Tuck" Myers, please visit our flower store.