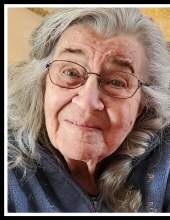 Orpha Walker died on December 27, 2020, at Windsor Manor in Webster City. She just celebrated her 96th birthday. Due to the covid pandemic, there will not be a service at this time. Interment will be at Graceland Cemetery in Webster City. Boman Funeral Home (www.bomanfh.com) is taking care of the family's needs.

Orpha was born on December 11, 1924, to Peter and Hattie (Nervig) Hanson in Hardy, Iowa. She graduated from the Blairsburg High School in 1942, and then went to college at Cedar Falls but dropped out to work at the John Deere plant in Waterloo to make parts for tanks during WWII. She then moved back to Blairsburg.

At the suggestion from her sister, Orpha called Winnie Walker for a date New Year's Eve 1943. They were married on October 1, 1944. She was not a typical housewife but assisted with the livestock and farming with Winnies father until 1946 at which time they started farming for Charles Hoyt four miles north of Highview. In 1951, they moved to one of the Hoyt farms one mile north of Highview to dairy farm and raise row crops. In 1971, they moved to their new home in the woods near Woolstock and continued to farm until their retirement in 1985.

In their spare time, they liked to square dance and ballroom dance. They also belonged to a card club. Orpha quilted and made stuffed bears. They liked to spend time with friends and family or going on Sunday drives. They began to take short winter trips in the late '60s in their Born Free Camper. Later they stopped roaming and stayed in McAllen, TX from 1972-1974. Then they moved to a warmer place in Ft. Myers, FL for the next 38 years.

Orpha loved farming, the outdoors, gardening, and participating and watching sports of all kinds, particularly tennis and basketball. She was a GS leader, worked with the youth at Fuller Hall, started a women's softball team, and always tried to encourage the school to include girls' athletics. She was involved with Ruth Circle at Trinity Lutheran Church. She belonged to Farm Bureau and helped with 4-H.