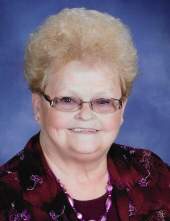 Patricia “Pat” Johnson, 77, of Webster City, (formerly of Palmer and Fort Dodge) passed away on Friday, January 31, 2020, at Crestview Nursing and Rehabilitation. Private family services will be held at a later date.

Patricia Ann Johnson was born July 26, 1942, Webster City, Iowa the daughter of Ray and Ellen Nelson. She attended Lincoln High School in Webster City, Iowa. On June 20th, 1959 Pat was united in Marriage to Garry R. Bauer of Webster City. To this union three children were born. Pat was also married to Richard Peterson. Together they operated Our Place Café in Webster City.

In 1997, Pat married Herbert L. Johnson of Fort Dodge at the Dayton United Methodist Church. Herb Passed away in 2011. She retired from Peed Publishing (Aviators Hot Line) of Fort Dodge in 2009, with a total of 29 years in telemarketing for various companies. Pat was a member of Trinity Lutheran Church of Webster City.