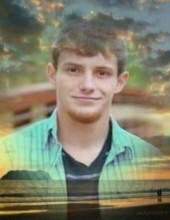 A beautiful life was cut way too short as another angel gained his wings on Thursday, July 18, 2019. Gage was many things to many people, the first being family. He was born November 15, 1993 to Kevin Arndt and Shanon Swenson Green, he was a big brother to Skylar Arndt and Blaise Green, and amazing uncle to Savannah Arndt, grandson to Duane & Judy Arndt and Paul (late) & Diane Swenson, nephew to Penny Rholl and Wendy Whitaker and cousin to Brandon Rholl, Dustin Rholl, Tucker Whitaker and Kennedy Whitaker. He left behind his girlfriend, Becky Hoeppner.

Gage had many passions that he enjoyed with his family and friends; including playing the guitar, surfing, riding motorcycles, the art of poi, drawing, tattooing, fishing, hunting, playing pool, movies and making people laugh.

He attended school at Webster City and was a competitive force on the wrestling team until age 16 when he suffered a brain aneurism and could no longer wrestle. Unfortunately, in the years to follow, Gage was having to wrestle bigger demons in his life including his battle with drug addiction.

With the loss of a loved one comes tears, anger, questions and a hard reality that life is messy, and no family is perfect. We had to have faith the he would realize the destructive consequences of his choices, instead, the time has come to mourn with heavy hearts the ultimate consequence that lead him to his eternal rest.

The family would like to share a very honest and heartfelt reality of Gage’s end of life: On Wednesday, July 17, in the evening, Gage was dropped off at the Hospital Emergency Room, alone, without ID, as a John Doe, with no pulse, after showing signs of a seizure that stopped his heart. He was put on life support, only to be taken off shortly thereafter as his organs had all shut down.

Our grief over losing him is infinite and now so is he. Our goal is that his death was not in vain and we pray that anyone or their loved one who may be suffering from any kind of addiction, please remember that consequences can be not only destructive but devastatingly final.

God bless all of you who have supported our family by your actions, comments, and prayers. Your love for Gage was felt by us all.
To send flowers to the family in memory of Paul Gage Arndt, please visit our flower store.