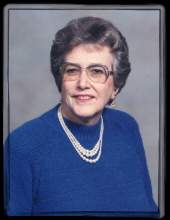 Phyllis Arline Richardson, 87 of Webster City died on July 8, 2017, at Mercy Hospital in Des Moines. The family will receive friends and relatives on Tuesday July 11, from 5-7 PM at Boman Funeral Home (www.Bomanfh.com) in Webster City. Family Gathering 11:00 AM Wednesday July 12, At Missionary Alliance Church in Blairsburg; with a Public Memorial Service to follow at 12:00.

Phyllis was born on June 3, 1930, NE of Webster City to Orin Harvey and Erma Dora (Foster) Short. She attended the Cass #3 school through 8th grade and then went to Webster City schools, graduating in 1947.

She married Melvin Richardson on August 22, 1948, at the Webster City Church of Christ. They lived in Omaha for three years and then came back to farm in the Webster City area. Phyllis worked as a Research Assistant at the Land O’ Lakes Research farm from 1974-1993. She and Melvin were owner/operator of P&M Monogramming in Webster City and later moved the store to Polk City in 1998.

She was a lifetime member of the Church of Christ and spent a number of years as a Sunday School teacher, sponsor of youth groups and was treasurer for 25 years. Most recently she was active in Mac Life Church, in Blairsburg. She was a member of the Main Street Kiwanis for a number of years, delivered Meals on Wheels, and in later years volunteered at Van Diest Medical Center as a greeter and in the Gift Shop.

Phyllis enjoyed her grandchildren and great grandchildren and especially liked following them on Facebook and getting pictures to put on their “picture wall” in the family room. She enjoyed crocheting, quilt making, fishing, reading, flowers and in earlier years camping and square dancing.

She was preceded in death by her parents; sisters Viola Crosby, Vesta Lowish, Leila Wemhoff; brother Estle and a brother in infancy.
To send flowers to the family in memory of Phyllis Arline Richardson, please visit our flower store.