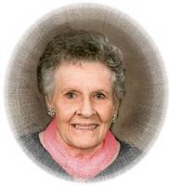 Phyllis G. Fister, 85, of Webster City, died Thursday November 11, 2010 at Mary Greeley Medical Center in Ames, IA.  A funeral service will be held Monday at 11:00 AM at the Boman Funeral Home in Webster City.  The visitation will be Sunday from 2 – 4 PM at the Boman Funeral Home.  Burial will be in Graceland Cemetery in Webster City.
She was born December 16, 1924 in Webster City to Alfred & Lulu (Brewer) Weedman.  She received her education in Webster City.  Phyllis was a baptized member of the Church of Christ.  On August 18, 1941, she married Leland LeRoy Riley in Kirksville, MO.  Leland died in 1957.
She and Hank Fister were married May 29, 1959 in Jackson, WI.  They owned and operated the West Curve Inn & Tire Shop in Webster City.  Hank died in 1987.  Phyllis, at 80 years old, became quite a researcher on the computer.  She would find all kinds of information that she would share with her family.

Most of all, she was a mother.  After raising her own children, Phyllis took on the roll of babysitter for her grandchildren and great grandchildren.  Everything revolved around her family.
Survivors include two daughters Sandy (Vernon) Hetland of Webster City, IA and Debbie (Roger) Consier of Joplin, MO; a son Danny Riley of Webster City; and numerous grandchildren, great grandchildren, & great great grandchildren.
She was preceded in death by her parents, husbands, two daughters (Cindy Helton & Shirley Jensen), brother (Donald) & sister (Estella).
Here is a favorite quote of mine.  It’s good to keep in mind.  “Remember me with smiles, love & laughter.  That’s how I’ll remember you all.  If you remember me with tears, then don’t remember me at all.”
With much love
Phyllis
To send flowers to the family in memory of Phyllis G. Fister, please visit our flower store.