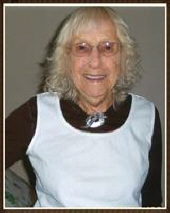 Phyllis was born to Harold and Vera Agnes (Davenport) Kepler on August 11, 1925 in Webster City IA.  Phyllis attended school in Webster City.  She was married to Weldon Krieger on in 1948, the couple had three children together.

Virgil and Phyllis were married on June 23, 1972 in Mankato, MN.  She was employed at Forester Creamery, Bash’s Drive in, and the Webster City Schools.  Phyllis enjoyed sewing, taking pictures and dancing, and was a member of The Heartland Cloggers Dancing group, and the Jehovah Witness Congregation.  She enjoyed very much sharing her love for Jehovah in the ministry

She was preceded in death by her parents; husband Virgil Coleman;  brothers: Harold Kepler Jr, and Roger Kepler; sisters: Marie Hanus, and Loraine Hanus; and stepson Larry Coleman
To send flowers to the family in memory of Phyllis Jean Coleman, please visit our flower store.