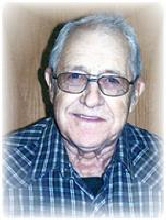 Raymond R Scott, 86, of Webster City, died Monday, November 17, 2014 at the Israel Family Hospice House in Ames, IA. Visitation will be Tuesday, November 18, from 5:00-8:00 p.m. at the Williams Community Center in Williams.  A private family burial will be held at a later date, with Pastor Chad Halbach officiating.
Ray was born on December 19, 1927 to Guy and Helen (Hoffman) Scott in Stratford, Iowa.  He attended country school in the rural Stratford area.  Ray married Patricia Riley on November 1, 1949 in Fort Dodge Iowa.  Ray farmed his entire life starting in the Stratford and Webster City area, then moving his family to Williams and continuing with 53 years of diversified farming. Ray was a longtime member of the Williams Lions Club, the Williams School Board, the “Hitch’n to Go Drive’n Club” and the Hamilton County Saddle Club.  He enjoyed driving ponies in the July 4th Parade in Williams, overnight trail rides and was always willing to give children rides in the pony cart.

Ray was preceded in death by his parents; wife, Patricia (Riley); two brothers Virgil and Vern; son Philip and son-in-law Edward Thomas.
To send flowers to the family in memory of Raymond R Scott, please visit our flower store.