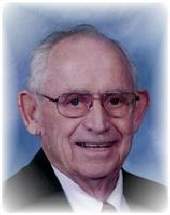 Rex King, 91 of Webster City, died Thursday, September 26, at the VanDiest Medical Center in Webster City.
Rex was born on June 03, 1922 to G. Marion and Gladys (White) King in Henry County, Iowa.  He graduated from the Salem High School in 1940.  He served as a Warrant Officer in the United States Marine Corps form 1942 – 1946.  Rex married Evelyn Long on July 9, 1947, together they raised three children.
He worked at Community First Bank of Cantril, Iowa for 35 years where he was an executive officer and board member.  Rex was a member of the Lions Club, Cantril Masonic Lodge, the Shriners and Asbury United Methodist Church in Webster City.  He enjoyed woodworking, in his spare time.  His wife Evelyn passed away in 2002.  He married Darleen Spencer on April 12, 2003.
Rex’s family includes his wife; two daughters:  Cindy (Robert) Farley, and Becky King, all of Webster City; one son: Ted (Cheryl) King, of Cedar Rapids, IA; nine grandchildren; 13 great grandchildren; and nine siblings.  He was preceded in death by his wife Evelyn; three siblings; one grandson; and one step-daughter.
Memorial Services will be Monday September 30, at 2:30 PM at the Asbury United Methodist Church.  Visitation will be prior to the Service from 1:30-2:30.  Boman Funeral Home in Webster City is in charge of Arrangements
To send flowers to the family in memory of Rex King, please visit our flower store.