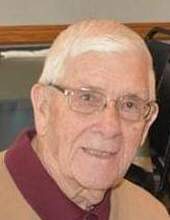 Richard was born January 21, 1928 to Charles Edward and Florence Edith (Morgan) Rasmussen in Eagle Grove, Iowa. He attended and graduated from Webster City High School in 1946. He entered the Navy in May of 1946 and was then discharged in November of that same year after being injured decommissioning ships. He married Norma Jean Shehorn on March 4, 1947.

From 1947-1948 he owned and operated the Eastside Grocery. He then went to work for McCollough Incorporated as a salesman for 14 years. From 1961-1964, He owned and operated Rasmussen Music Store. He then worked for Kline Manufacturing out of Burlington from 1964 until his retirement in 1988.

Richard was a member of Webster City Church of Christ and the Links Golf Course.