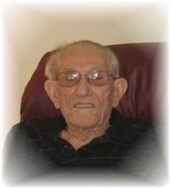 Richard Berleen, 83, of Story City, IA, died Tuesday at Israel Family Hospice House in Ames, IA.  A memorial service will be held Thursday May 27, 2010 @ 11:00am at Faith United Methodist Church in Webster City. A visitation with the family will be at the church Wednesday from   5-7.
Richard Franklin Berleen, son of Floyd Keith and Rosy Cordelia (Miller) Berleen, was born October 5, 1926, on a farm northeast of Webster City. Richard was united in marriage with the love of his life, Dorothy Kathleen Abels, August 7, 1948, at her home near Kanawha. He spent almost sixty-two years loving his wife, a true partner in all aspects of his life. Even at the end her touch could quiet him and bring relief no matter how great the pain.
A farmer to his core Dad found beauty in a field of grain, a scenic view or  pen of healthy livestock. A very active member of the Mulberry Center and Faith United Methodist Churches Dad was a strong, quiet man who believed God never sent more than you and he could bear. He said he always felt closet to God in his tractor working the fields.
Dad had a knack for making others feel special. He could start a conversation with anyone and never knew a stranger. He touched many lives and had no idea how special he was.
He was happiest when working with his hands creating things, some useful some just for fun. Many of the grand and great grandkids most precious memories are of the hours spent with their “grandpa-made” go carts. Each one was customized to the driver’s age and skill level. Keeping them up and running kept Dad as busy as any pit row mechanic.
Dad and Mom farmed with Mark and Vi Berogan for over forty-five years. After Uncle Mark and Auntie Vi retired the folks continued to farm until Dad’s health began to fail. In January 2008 they moved to Timberland Village in Story City.
He is survived by his wife, Dorothy, two daughters and their husbands; Cindy and Paul Shelton of Hampton and Debbie and Jim Slauson of Lantana, TX, four grandchildren; Heather Shelton-Rivera, Heath Shelton , Katie and Mike Blevins and six great grandchildren; Phoenix, Catie, Isaac, Gabriel, Raegan and Emma. He was preceded in death by his parents and eight siblings.
Dad would want everyone to remember what is really important: faith in God, family and friends all loving, living and taking care of each other. He will be missed by family and friends. We love you, Daddy.
In lieu of flowers the family requests memorials be given for Israel Family Hospice House, Ames, Iowa
To send flowers to the family in memory of Richard Franklin Berleen, please visit our flower store.