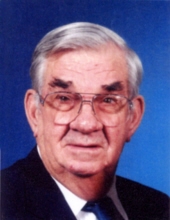 Richard L. “Frog” Breiner, 90, of Webster City, died on Sunday, February 19, 2017 at the Van Diest Medical Center in Webster City. A private memorial service will be held on a later date. The family has chosen Boman Funeral Home (www.bomanfh.com) to care for their needs.

Richard was born to Floyd and Mary (Guerttman) Breiner on March 27, 1926 in Humboldt, Iowa. He attended Humboldt Public School. In 1944 he enlisted in the Navy and served during WWII in Guam as a Seabee.

He married Naoma Pageler in February of 1957. They had four sons: Jeffrey of Dundiak, Maryland, Joel (Chemene) of Anchorage, Alaska, Jason and James; three grandchildren Selena, Alex and Gavin. Naoma died in an auto accident in 1973.

Frog worked construction with several companies in several states. Most notably helping build the stadium and other building at ISU. He retired from Woodruff Construction in 1988.

In addition to his children, and grandchildren he is survived by: sister Gertrude Stohlgren of Des Moines, Iowa; and many nieces and nephews.

Frog was a member of St. Peter’s Lutheran Church. He enjoyed dancing and attending flea markets.

He was preceded in death by his parents; first wife Naoma; sons Jason and James; brothers and sisters-in-law: William (Betty), George (Florence) Breiner; brother-in-law Don Stohlgren; and several other in-laws.
To send flowers to the family in memory of Richard "Frog" Breiner, please visit our flower store.