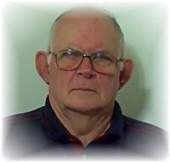 “Junior” Richard O. Humble, 80, died Saturday, December 1, 2012 at home in Webster City. Richard’s Celebration of Life will be held Wednesday December 5, 2012 1 PM at Boman Funeral Home, Webster City, Iowa, with family greeting friends one hour prior to the service.  Memorials may be made to a charity of your choice. On-line condolences may be made to the family at www.bomanfh.com.

Richard O. Humble was born July 25, 1932 in Stanhope, Iowa, the son of James and Hazel Humble, living and attending school in Stanhope and Webster City.  In 1956, he married Ann Kistner.

Junior worked over 50 years at the Webster City Veterinary Clinic. He served on the Hamilton County Conservation Board and for many years helped with Boy Scout Troop 22. Richard spent his entire life easing others’ lives, beginning early in life taking care of two elderly aunts and his father; his genuine concern for others continued throughout his life. Many will remember his woodworking and hand-crafted Christmas items shared with friends over the years. His steady faith served as a witness to others; his quick wit and good nature will be sorely missed.

Richard is survived by his wife, three sons, and nine grandchildren: Richard and Rita Humble of Blue Springs, MO, Joel and Alexandria; Robert and Connie Humble of Estherville, IA, Margot, Rob, Elizabeth, Zachary, Colleen, and Laura; and John and Sonia Humble of Woolstock, IA, Travis; a sister, Jean Belew, a sister-in-law Mary Mummert, and two nieces. Richard was preceded in death by his parents.
To send flowers to the family in memory of Richard Humble, please visit our flower store.