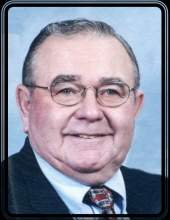 Richard Jerry Hinton passed away quietly in his sleep on October 14, 2018, at Clarion Wellness and Rehabilitation Center in Clarion, Iowa. The family will receive friends and relatives on Friday, October 19, from 5:00 – 7:00 PM at Holmes Baptist Church, Holmes, Iowa. The funeral service will be 2:00 PM on Saturday, October 20, at Holmes Baptist Church. The family has chosen Boman Funeral Home (www.bomanfh.com) to care for their needs

Jerry was born on April 27, 1930, near Knierim, Iowa in Webster County. He graduated from Clarion Public High School in 1948 where he lettered in basketball. After graduation, he worked as the bookkeeper for Holmes Co-op Elevator in Holmes, Iowa.

He was united in marriage to Jeannine Annette Nelson on June 25, 1950. Jerry farmed northwest of Clarion for forty-one years. And he worked in Clarion for the North Central Cooperative for a few years as a DeKalb Seed salesman and a fertilizer/chemical director.

Jerry was an active member of Holmes Baptist Church all throughout his adult life. He served on the deacons’ board, pulpit committee, and worship committee. He led congregational singing. He also taught Sunday school and young adult classes for a number of years.

He was most known in later years as the “popcorn man”. He gifted people in Clarion with kettle cooked popcorn which he received from a longtime friend, Ray Steffy, who lives in Kansas. Jerry enjoyed his trips to Kansas to visit Ray and his wife, Jan.

Jerry was preceded in death by his wife of sixty-three years, Jeannine, his parents, Taylor and Beulah, one brother, James, one sister, Doris, his daughter in law, Janell, one grandson, Nathaniel and one great-grandson, Spencer.

Jerry is survived by his three sons; Mark and wife Connie, of Clarion, Iowa, Michael and wife, Elaine, of Columbia, Missouri, Merle and wife, Jody of Estherville, Iowa, a sister, Theila Borel of Humboldt, Iowa, five grandsons, three granddaughters, and great-grandchildren.
To send flowers to the family in memory of Richard Jerry Hinton, please visit our flower store.