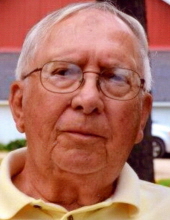 Richard Douglas Nedved passed peacefully on May 29, 2018, in the loving care of Southfield Wellness Community. Funeral Service will be at Asbury United Methodist Church on June 5th at 11:00 AM with a visitation before the service starting at 9:30 am. The family has entrusted Boman Funeral Home (www.bomanfh.com) to care for their needs.

Richard “Dick”, son of Raleigh and Kate Nedved was born on June 16, 1929, at Britt Iowa. He graduated from Britt Public School and Jr. College and served in the U.S. Army and reserves for 5 years. On June 20, 1953, he married Mavis Arlene Rinehart at the Prairie Center Methodist Church near Britt. Dick worked in the office of the Britt Coop Elevator then moved to Gilmore City as the manager. In 1967 he moved his family to Webster City and continued his work for Farmland Industries until his retirement.

Dick loved his church, family, and friends. He enjoyed golfing at Briggs Woods and fellowship with friends during the off season.

Dick is survived by his wife; sons: Max (Catherine) of Webster City, Todd (Annette) of Greenville, MI, Anthony (Sue) of Winston Salem, NC, and Christopher (Ranay) of Lake City, IA. He was blessed with 15 grandchildren and 12 great-grandchildren; many nieces and nephews.

In addition to his parents, he was preceded in death by infant brother Lyle, sister Joan Ficenec and twin brother Robert.

In Lieu of flowers, Donations will be given to organizations at the families discretion.
To send flowers to the family in memory of Richard Nedved, please visit our flower store.