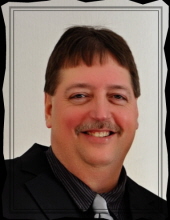 Robbie “Moose” Lee Brinkman, 54 of Webster City, died on Friday, November 4, 2016, at the Mercy Medical Center in Mason City, Iowa. The family will receive friends and relatives on Tuesday, November 8 from 4-7PM at Boman Funeral Home, and A Celebration of Life service on Wednesday, Nov 9, 11 AM at Asbury United Methodist Church, Webster City. The family requests that people come to the service dressed in casual clothes, anything sports or hunting related. The family has chosen Boman Funeral Home (www.bomanfh.com) to care for their needs.

Rob was born on June 21, 1962, in Mason City, Iowa to Shirley Ann Brinkman. They later moved to Webster City where he graduated high school in 1980. Rob married Cathy Groves in 1984, the couple later divorced. He worked for 25 years at Electrolux, until it closed.

His hobbies included Hunting Duck, Geese, Pheasant, and Deer, and in his spare time he could be found cruising the gravel roads enjoying nature. He loved to grill and cook for others. Rob was a fan of Hawkeye football & basketball and Minnesota Viking football, and especially liked watching his sons play for the Webster City Lynx. What he enjoyed the most was spending time with his family especially his grandkids, and his beloved dog Rocky.