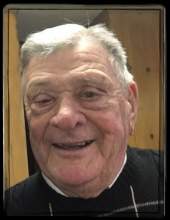 Robert “Bob” Olson, 87, of Webster City, Iowa died suddenly on Saturday, December 30, 2017, at Van Diest Medical Center. Visitation will be on Saturday, January 6, 2018, at the Faith United Methodist Church in Webster City from 9:00 AM – 10:45 AM with a memorial service following at 11:00 AM. The family has chosen Boman Funeral Home (Bomanfh.com) to care for their needs.

From 1952 – 1955 he was the manager at the Co-op in Gilbert, and then managed the Webster City Community Co-op until 1960. Bob then owned and operated the Olson Bag Company for eight years, after this, he managed the Kamrar Co-op and Elevator & Supply and was instrumental in organizing the merger for it to become United Co-op.

He was a member of the Webster City American Legion Post 191, and Faith United Methodist Church. Bob enjoyed cribbage, golf, horseshoes, dancing and spending time with Pat at their cabin in Clear Lake and winters in Arizona. He was a people person, enjoyed life, and an encouragement to many.

The family would prefer memorials instead of flowers.
To send flowers to the family in memory of Robert "Bob" Olson, please visit our flower store.