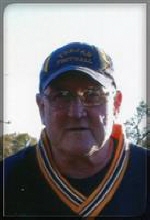 Robert Seiser Sr. passed away at VanDiest Medical Center on Sunday, October 4, 2015, at the age of 71.  A memorial service will be held at 11:00 AM on Wednesday, October 7th at the Webster City Church of Christ, with a luncheon to follow the service at the bridge (across from the church).  A visitation will be held prior to the service at 10:00.


He was born on May 14, 1944 in Webster City, IA to William and Mary (Simpson) Seiser.  Robert worked in masonry and construction for the majority of his life.  He did masonry work at several locations around Webster City including the courthouse, Hamilton County Fairground (entrance arch), the fire station and many others.


Robert was known as “Catfish Bob” and for his love of fishing.  Some of his favorite past times were Saturday night races and the bowling league that he participated in with his brothers.  He had a passion for his children, grandchildren and great grandchildren.  Robert was a well-known and respected member of the community, and he went out of his way to help many.  Even in his later struggles with his health he was always helping others when needed.