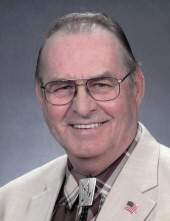 Lt. Col. Robert E. Jewell of Webster City, passed away peacefully on April 19, 2022, at Trinity Lutheran Hospital in Fort Dodge, Iowa. Visitation will be at Boman Funeral Home (www.bomanfh.com) in Webster City, from 5 -5:45 PM on Saturday, May 14, 2022, with a memorial service to follow at 6PM. Gina Spohnheimerwill officiate. Interment will be at a later date, at Graceland Cemetery in Webster City.

Robert Edward Jewell was born on February 4, 1937, in Ames, Iowa. He is the son of Robert W. Jewell and Vera (Ahrens). He graduated from Ellsworth High School, with the class of 1955. He was united in marriage to Sharon K. (Shelton) on September 1, 1956. Robert is survived by his wife Sharon and their three children: Robert D. (Sue), Doreen (Robert) Crespin, and James A. (Marsha); brother-in-law Bill (Pat) Shelton; 15 grandchildren; 14 great-grandchildren; and many nieces and nephews. He was preceded in death by his parents; sister-in-law Nancy Shelton, and great-granddaughter Madison Ann Toftee.

Robert joined the Iowa National Guard in 1955. He was a career military officer in the United States Army where he served in multiple US locations, as well as foreign locations including Germany, one tour of duty in South Korea, and two tours of duty in Vietnam. He retired on February 4, 1997, as a Lieutenant Colonel.

Following Robert’s second tour of duty in Vietnam, he attended classes at the University of Nebraska in Omaha.

Robert loved to read, fish, and spend time with his family and cats. He and Sharon enjoyed multiple trips touring many U.S. States and National Parks, following his retirement.

To send flowers to the family in memory of Robert Jewell, please visit our flower store.