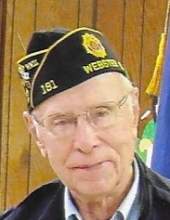 Robert Crumpton Kepler, son of Oscar and Bessie (Smith) Kepler, was born on June 11, 1925 in Webster City, Iowa. He received his education in the Webster City school system, graduating from Lincoln High School. In 1943 he enlisted in the United States Navy, serving in the Asiatic-Pacific Theater of the war, participating in three major island invasions and the Philippine Liberation Campaign. He was honorably discharged in 1946 and returned to Webster City where he was employed at Beam Manufacturing Company.

In December of 1946 he was united in marriage to Laura Belle Koob in Missouri Valley, Iowa. The couple resided in Webster City. On December 26, 1951, a daughter Kathryn Susan Kepler was born to this union.

In 1957 Robert was transferred to Minneapolis, MN where he worked as an account manager in major appliance sales for Franklin Manufacturing Company. In 1967 he moved his family to Galt, Ontario Canada where he was appointed Vice-President of Sales for White Consolidated Industries (WCI) Canadian Accounts. In 1974 he was transferred back to Webster City as Vice-President of Marketing for WCI’s (Frigidaire) Laundry Division. After his retirement in 1988, he worked occasionally for Electrolux Laundry Plant on special assignments.

Robert was a member of the First Baptist Church and as a veteran of World War II, a long-term member of American Legion Post 191. He looked forward to attending his military group reunions and took the October 13, 2009 Honor Flight to the Washington, DC War Memorials. His family was his greatest joy and he loved spending time with them, especially on their annual summer vacation trips. He and Laura both enjoyed travel throughout their 66 years of marriage.

He is survived by his grandson Scott (Melanie) Ralston of Broomfield, CO; great grand-daughter Eden Andria Ralston of Fairfax, VA; and several nieces and nephews. In addition to his parents, brothers and sisters, Robert was preceded in death by his beloved wife Laura in June of 2012, and daughter Kathryn in June of 1996.
To send flowers to the family in memory of Robert Kepler, please visit our flower store.